Indiegogo vs. Kickstarter: The Important Differences

IndieGoGo vs. Kickstarter? From fees to countries, launch a successful campaign by understanding the key differences between crowdfunding platforms. 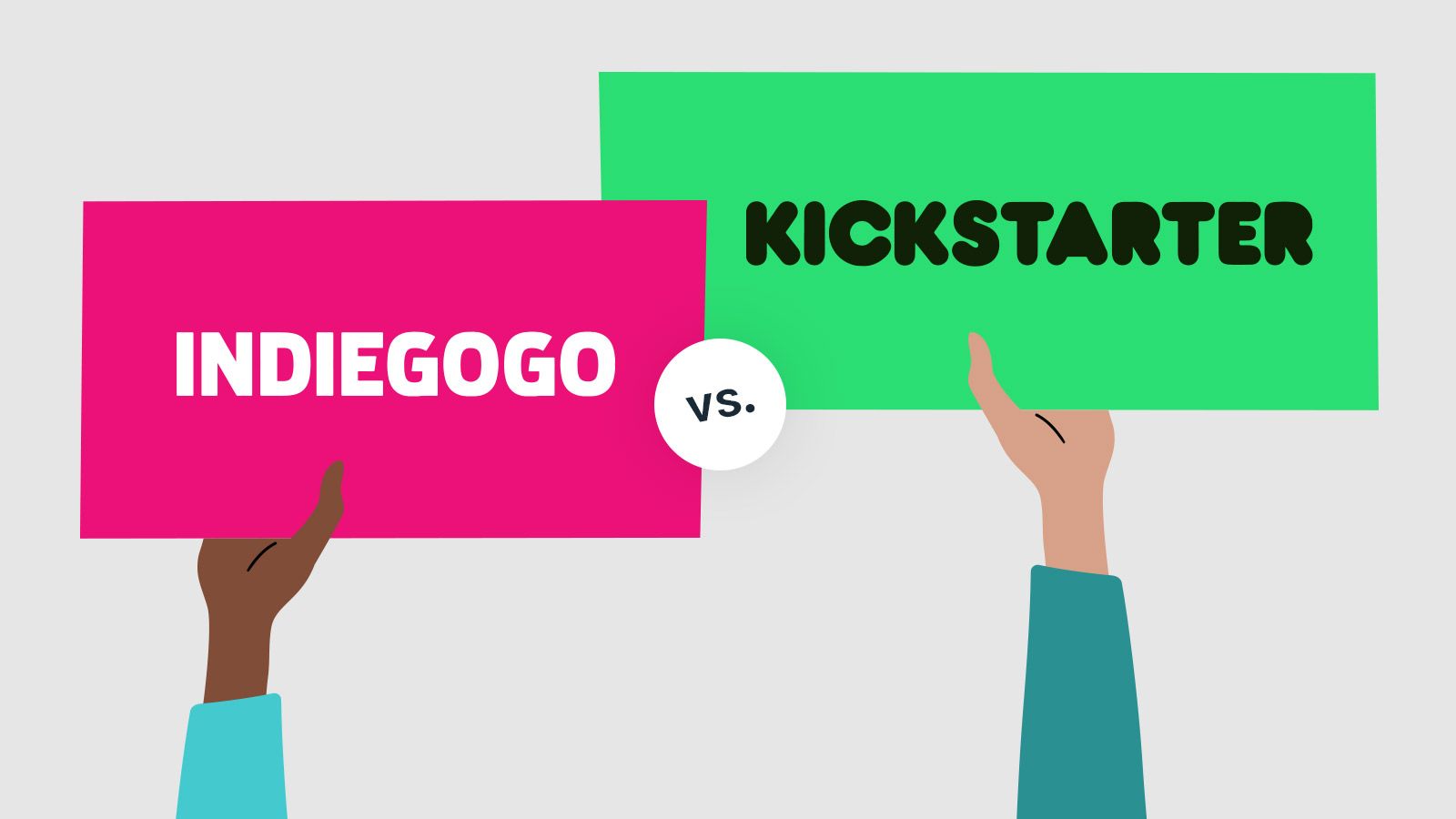 Crowdfunding with Kickstarter and Indiegogo is pretty common worldwide. However, there are some notable differences between the two that you should be aware of. What may work with Indiegogo might not work with Kickstarter and vice versa, so we’ve written this handy article that will address these issues and help you make a more informed decision regarding the best fit for your campaign.

First, let’s take a look at the basics of Indiegogo vs. Kickstarter.

The Basics of Indiegogo

Indiegogo is a crowdfunding platform for creative, tech, and community projects. It’s free to set up a campaign, plus they offer flexible funding so that means you get to keep every dollar you raise.

Sounds good to you? Here are some other facts about Indiegogo crowdfunding:

You’re just a few steps away from kicking off your crowdfunding campaign with Indiegogo. Keep reading to learn more about the difference between Indiegogo vs. Kickstarter, so you know what works best for yourself.

The Basics of Kickstarter

Kickstarter is another great option for running a successful crowdfunding campaign. Based in Greenpoint, Brooklyn, Kickstarter has successfully funded over 59,000 projects. Plus, it’s great for creative projects.

Sounds good to you? Here are some other facts about Kickstarter crowdfunding:

Kickstarter might be more recognizable to many, though there are still fallbacks in using the popular crowdfunding platform. In this section, we’ll go over all the pros and cons of Kickstarter, so you know what works best for your needs. Let’s jump in.

Indiegogo vs. Kickstarter: What’s the Difference?

Indiegogo and Kickstarter are both great ways to run a successful crowdfunding campaign. However, it’s important to weigh the advantages and disadvantages when choosing the right platform for yourself.

In this section, we’ll go over the key differences between Indiegogo and Kickstarter. This way you know what better works for yourself. Let’s dive in.

It’s possible that you could be turned down before you even get a chance to share your project on either platform, as there are qualifying criteria for both. You should first determine if your project is in line with Kickstarter’s and Indiegogo’s expectations.

Kickstarter expects projects to be creative and worthwhile. It shouldn’t be misleading and must be presented in a straightforward way. They do not allow campaigns that are looking for charity fundraising, and financial investments such as equity are prohibited. Do take the time to familiarize yourself with what’s prohibited on Kickstarter.

Indiegogo states that if the campaign claims to do things that are otherwise impossible or sound phony, it shouldn't be posted. It’s also worth noting that Indiegogo campaign owners are legally bound to fulfill the promises they have made to their supporters. In the case of default, the campaigner and backers would need to reach a mutual agreement. Check out Indiegogo’s terms to find out more about prohibited campaigns and perks.

Before you launch your campaign, you will need to check if it falls under any of the categories available. Sometimes, choosing a category can be tricky.

For example, “Design” and “Fashion” may seem similar to some. “Design” is a broad term that can include subjects such as interior design, jewelry design, luggage design, and architectural design. “Fashion” would mostly be clothing and accessories. Posting your campaign under the correct category is also important so you can be sure you are targeting the right audience.

Categories on Indiegogo: Indiegogo recently expanded their categories list in 2017, making them more specific so they can better represent projects. To see their complete list, check out their blog post.

Kickstarter is an ‘all or nothing’ (fixed funding) kind of crowdfunding platform. That means that if you set your crowdfunding goal at $5000, you will need to raise at least $5000 to receive the raised funds. If you do not reach the minimum set goal, then you walk away with nothing.

Indiegogo has one more option besides the conventional fixed funding method, known as the “flexible funding” method. If a campaigner chooses to go with the flexible financing option, they will get whatever amount they have raised throughout the project, whether the campaign reaches the set goal or not.

When do Indiegogo and Kickstarter charge a backer's card? That's a good question - because of these differences in funding, credit card charges are affected.

Since Kickstarter is all or nothing, backers will only be charged at the end of the campaign, if the goal was fulfilled.

For Indiegogo, a backer's card will be charged right away.

Kickstarter has a very clear-cut review process. Their “Launch Now” feature uses an algorithm to determine whether your project is ready to go live. If your project doesn’t qualify, Kickstarter will manually review your campaign, which they quote three business days for turnaround. The good news is about 80% of the campaigns submitted to Kickstarter do get approved and published. Find out everything you need to know about the Kickstarter review process.

Indiegogo is a more welcoming platform as it has no set review processes. They are also open to charity fundraising and commercial projects. All you need to do is click the “START A CAMPAIGN” button found on the top right corner of the homepage to get going.

Kickstarter applies a 5% fee on all successfully funded campaigns in addition to another 3% + $0.20 per pledge for processing fees. Visit the link here and select your country from the dropdown menu. You will then find out the complete fee breakdown that will be charged based on your country, should your crowdfunding succeed. No fees are charged if your campaign is unsuccessful.

Indiegogo waives their 5% platform fee if you are raising funds for a charitable cause, but there will still be a processing fee of 3% + $0.30 for third-party credit card fees. If you are raising funds for a commercial project, you will be charged a fee of 5% + 3-5% of the processing fee + $25 wire transfer fee if you are transferring funds raised in US dollars to a bank located outside the US. For more visibility on when Indiegogo charges you, please visit Indiegogo's Fees & Pricing page.

Supported Countries with Indiegogo vs. Kickstarter

Kickstarter and Indiegogo are well known, but there are parts of the world that are not supported by these platforms.

Thinking of starting a Kickstarter project outside the US? As of July 2017, these are the countries you can do a Kickstarter in the UK, Canada, Australia, New Zealand, the Netherlands, Denmark, Ireland, Norway, Sweden, Germany, France, Spain, Italy, Austria, Belgium, Switzerland, Luxembourg, Hong Kong, Singapore, and Mexico.

You will also need to meet the following requirements:

*Parents and teachers can launch projects on behalf of children under 18, only if the adult registers for the Kickstarter, provide their banking information, and is in charge of running the project itself.

**Citizens of the E.U. are welcome to use a government-issued ID from any E.U. country (such as an E.U. passport, etc.)

***Citizens of Canada must have a major credit card.

Indiegogo supports any country that is supported by PayPal. Currently, PayPal is available in over 200 countries and can hold balances in 25 currencies.

If you reach your set goal before the deadline, congratulations! Kickstarter and Indiegogo offer different options in this situation.

If you are still far from your Kickstarter deadline date but have already reached your official set goal, you can choose to add a “stretch goal”. Stretch goals are meant for creators to raise even more money, usually with the end goal of delivering a more advanced product.

Funds are collected whether or not you reach your stretch goals, as long as your initial goal was met. Coolest Cooler, one of the most famous crowdfunding success stories, originally set their funding goal to $50,000. They ended up raising over $13M.

If you decide to opt-in for Indiegogo InDemand, it will automatically go into effect once your initial campaign meets its goals and reaches the deadline. You can continue to raise funds after the initial deadline, and there is no need to set a funding limit or an extended deadline at this stage. Campaigners can choose to end the project whenever they see fit.

It is to your advantage to research and target people who you believe will be interested in your project. Studying the demographics of your target audience will help you make well-informed decisions in marketing your project and reaching your goals.

Since their inception, both platforms have been constant drivers in the crowdfunding industry. To summarize:

Kickstarter loves anything that is organized and has credibility. If you’re unsure about your project and marketing plan, Kickstarter would not be a good fit. However, if you have a set plan with goals you want to reach, you can succeed here.

The platform has many loyal supporters, with over 4.2 million repeat backers as of July 2017. Currently, the most popular categories are games, design, and technology.

Some of the most famous campaigns are Coolest Cooler, Pebble Watches, Exploding Kittens, and The World’s Best Travel Jacket. Check out Kickstarter’s most funded campaigns here.

Indiegogo takes pride in being the world’s first crowdfunding platform. As of 2015, they have raised over $800M in crowdfunding. The best part about the platform is that if your country is supported by PayPal, you can launch an Indiegogo.

Moreover, Indiegogo is the only mainstream crowdfunding platform that allows enterprise campaigning, donation-based crowdfunding, as well as equity crowdfunding through their platform. It also appears that their review process is a little more relaxed than Kickstarter’s.

Therefore, if you are still at the concept stage and are looking to test the waters, Indiegogo is the place for you. Some of the top Indiegogo campaigns in 2016 include ONAGOfly: The Smart Nano Drone, popSLATE 2 - Smart Second Screen for iPhone, Mokacam - The World’s Smallest 4K Camera and RoccBox: The Portable Stone Bake Pizza Oven.

Easyship integrates with both Indiegogo and Kickstarter. As the #1 shipping partner in crowdfunding, we’re with you every step of the way. Our shipping consultants will work with you and your team throughout each phase of fulfillment for your backers.

We also have a global network of warehouses and shipping partners ensuring you keep your costs and tax obligations as low as possible. That way you can ship internationally with confidence. Start planning and get an instant quote from the shipping partner of the world’s biggest campaigns. Sound good to you? We even offer a free Crowdfunding Shipping Cost Estimate.

Open an Easyship account today and see how simple shipping will be for your campaign. Register for free today.

What’s the biggest difference between Indiegogo and Kickstarter?

The biggest difference between the two is that Kickstarter releases funds after the campaign reaches its funding goal, but Indiegogo allows you to choose between receiving funds as it comes in or waiting until you hit the predetermined target.

How is GoFundMe different from Indiegogo and Kickstarter?

GoFundMe is a crowdfunding platform designed for individuals and personal causes. Kickstarter and Indiegogo focus on creative projects such as film, music, art, and more.

Is Indiegogo safer than Kickstarter?

Both crowdfunding websites are safe to use. Both Indiegogo and Kickstarter are responsible for providing a safe and reliable platform for their users.

So, will you be choosing between Kickstarter or Indiegogo? Let us know in the comments below!

If you found this article informative, you might enjoy the following: