Keyboardio's third Kickstarter campaign was a runaway success - we sat down with founder Jesse Vincent to find out his secrets to a great campaign. 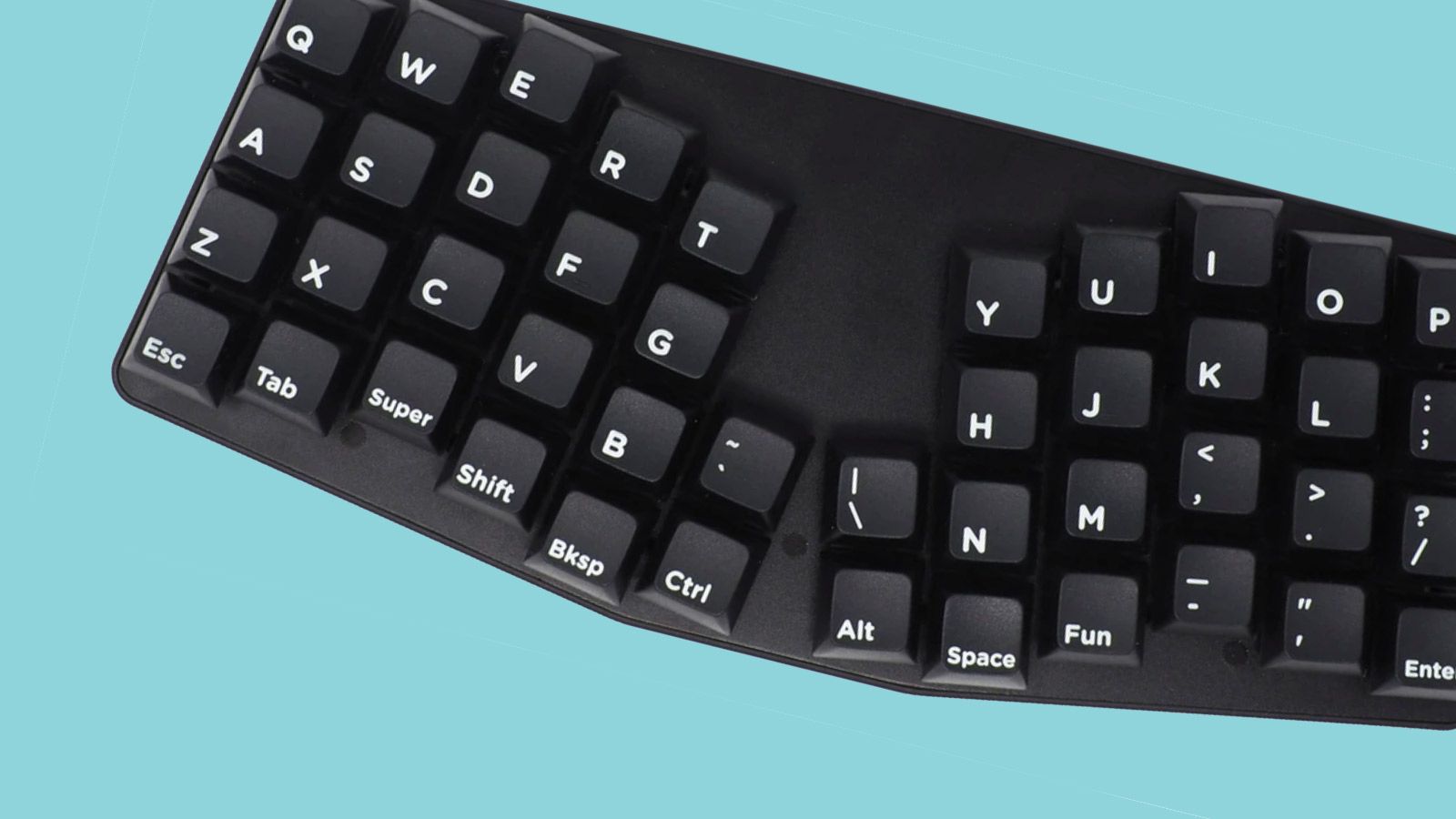 Jesse Vincent was taking some time off after the Software as a Service startup he’d been working on didn’t pan out. He’d seen people on the internet building themselves keyboards and decided it was a good idea, so he decided to spend a month doing exactly that.

He and his wife, Kaia, ended up creating several prototypes. They were up to four when people started asking where they could buy it. That’s when they decided they wanted to do a Kickstarter campaign for a keyboard made out of laser-cut plywood that they would assemble in their living room. This is where Keyboardio’s story starts.

They went through a hardware incubator and ended up doing a much larger Kickstarter campaign for a butterfly-shaped keyboard made out of two blocks of solid maple with RGB lighting under every individually-sculpted keycap.

Along the way, they spend a lot of time in China learning how to get products made in factories there and obsessively documented their findings in their Kickstarter backer updates. They became famous for being that Kickstarter campaign that sent out a 5,000-word email every month.

Now, on their third campaign, it looks like they’ve got this crowdfunding thing figured out. This current campaign reached its goal of $25,000 in just eight hours and raised $217,000 in just two weeks. So, we spoke to Jesse about the secrets to crowdfunding success.

Easyship: Hi Jesse! Thanks for joining us today and taking the time to talk about Keyboardio. First of all, congratulations on your recent crowdfunding campaign! It’s an amazing achievement, so tell us your secrets -  how did you do it?

Jesse: It’s not really a secret! Anyone who’s done a crowdfunding campaign will tell you that what matters is having an audience and a community. We’ve been around for about five years now and this was our second Kickstarter [campaign] for a keyboard. Going into this, we’ve been telling people what we’re working on and giving them a heads up about when it’s going to be coming.

I’m also giving most of our customers and potential customers a preview of the Kickstarter campaign. So this means everyone’s waiting and watching, knowing they can go and click the button as soon as the campaign launches.

Easyship: Talk us through the process of developing your prototypes. What were the challenges you had to deal with?

Jesse: So this time around, it’s been going a lot more smoothly than we’d expected, which is a really pleasant change. If you read about our experiences the first time around, we ran into every problem in the book!

So, [our designer] Phil came to us with the keyboard layout and basic shape. I used some tools that I’ve built to turn that into a circuit board that has a programmable microcontroller. We sent these off to be prototyped.

When it came back, there was a small mistake on my part that meant I had to spend an hour with each of the five samples, a microscope, and a knife, fixing the electrical traces on the circuit board! In the grand scheme of things that’s not a big problem, though.

I then knocked up a rough physical design for what I thought the whole thing should look like in Autodesk Fusion 360 and we spec’d it out and sent it off to two factories that we thought might be good partners to work with.

Both of them offered to help with the mechanical design, which meant that rather than us coming to them with a fully finished product, they were able to help with the process. We gave them the parts, the electrical design, and some pictures of what we wanted and they came back and proposed how the whole thing would be assembled.

Easyship: Let’s talk about funding. You've used Kickstarter for all your campaigns, but did you explore other avenues to raise funds?

Now that we have a little bit more experience, we're doing what we can to make it a smoother experience both for ourselves and for our customers. We love Kickstarter, it’s a great way to sell products.

But Kickstarter is a way for us to go to our customers, show them what we’re doing, how they can help us, why we need them. And then they can essentially give us money in advance - they’re making a pledge to help us kick-start this project, and in exchange, they’re getting a reward.

Easyship: This is your third campaign, so you’ve obviously had a lot of experience by now. What did you learn from your first campaign that you’ve translated into this third one to achieve so much success so quickly? What advice can you offer to first-time campaigners?

Jesse: The biggest thing is to be open and honest with your customers. Our first keyboard shipped years late. We ran into all kinds of crazy problems. As it turned out, the salesperson at our factory was a con artist who was scamming the factory and scamming us!

You can read all about it on the public backer updates for our first Kickstarter campaign. Effectively, we delivered to our customers and they loved the product, and someone was actively working against us to try to stop us at every step.

But we were open and honest with our customers. And when you're writing a backer update for your customers, telling them what's gone badly and what's gone wrong and explaining not just what happened but why, to the best of your understanding, builds a lot of trust.

Making something that people want at a price that is attractive is also important. I've seen a lot of campaigns price things below cost and while that may be a recipe for a lot of sales, it doesn’t create a thriving business with customers who trust you and are happy with what’s happening.

Easyship: We always say that a big factor in crowdfunding success is having a good fulfillment strategy and budget. What were your first experiences with fulfilling your campaign like?

Jesse: In the beginning, we selected a fulfillment company in California that had been in the business for awhile. They came highly recommended, but they ended up not being a great fit.

I asked around and a friend mentioned that he’d worked with Easyship. I ended up meeting the Easyship founders at CES. I’d answered a cold email scheduling an appointment to go to the Easyship hospitality suite at CES to talk about fulfillment, and I ended up talking to the CEO for an hour.

A month later, when I was in Hong Kong, I got to check out the warehouse that Easyship would fulfill our orders from. So, we decided to give it a go.

Easyship: And how did you find getting started on the platform?

Jesse: At the very beginning, we were importing into Easyship from Backerkit. They provided CSV data that I could then upload. I know you guys now have more direct integration but I haven’t gotten to play with that yet.

But then we started looking at how to specify carriers...we cared about which carriers we were using for which country. You guys were doing direct injection with DHL eCommerce for us for the US.

Initially, the recommendation was to just download the spreadsheet version of your orders, edit it, delete your orders and reupload it. That was a recommendation from the salesperson because it’s a very straightforward way for anybody with no programming experience to do this.

I ended up deciding instead, in my hotel room in Shenzhen, to look at your API. I wrote a 15 line PERL script in about half an hour that meant that instead of downloading all the orders, it just went through them one by one, checked to see if they were being sent to the US, and corrected the courier. Since then, I've built a bunch of other little tools.

Easyship: Great! So, in terms of using the Easyship dashboard, are there certain features that you find especially useful in managing your fulfillment process?

Jesse: When we're doing crowdfunding campaigns, we're doing bulk imports. Otherwise, most of our orders are synced from Shopify. It's possible to fully automate this but we prefer to have a manual check where, every day before the warehouse and shipping cut-off, we’ll go in and check through all of the outgoing shipments. That involves very simple sorting and filtering that we have available on the dashboard.

When we’re getting ready to do a crowdfunding offering, one of the things we need to do is figure out our shipping rates because we need to provide those to Kickstarter in advance of the campaign.

And so, we'll either use the API or the dashboard to walk through our box sizes and add our weights and other custom values. We then add our list of countries to build up a table of what our shipping costs are going to be for reaching those countries.

Easyship: What effect has Easyship had on your business? Has it been useful for managing customer expectations?

Jesse: For us, it’s really all about the customer experience. Shipping costs matter and Easyship’s rates are incredibly competitive for the places that we're shipping to. Because we're fulfilling out of Hong Kong we don't always have the cheapest fulfillment to the US, but globally we've got really great rates.

We ended up making the business decision to ensure that US customers always see a very discounted rate. And because of that, it meant that customers in places like Australia and Singapore often end up seeing free shipping from us, because it's cheaper for us to get stuff to Singapore and Australia than to the US.

I've heard really positive things from customers in both places because they are not used to getting free shipping from foreign companies. You know, that's been really pleasant.

But for us, Easyship has so many different courier partners and we ship to so many different places on earth that we're usually able to find something that's cost-competitive, and it provides pretty good insights to the customer about what's going on with the shipment - there’s good tracking and good explanations of what rates look like to customers. The Shopify integration that gets real-time pricing and provides the cheapest option, the recommended option, the fastest option, is really nice.

Looking for a fulfillment partner for your next crowdfunding campaign? Easyship’s shipping rates calculator can help you estimate a fulfillment budget and set a realistic goal while our full suite of tools will make your campaign fulfillment process a breeze.